One more week of the looser, colorful ocean theme I have been on. The Scribbled Angelfish,  also known as Duboulay’s Angelfish, is a favorite among aquarists. The lips are a dull yellow while the face and body are predominately a dark blue-black. Separating the head from the body is a wide vertical band of yellow and white. A yellow stripe adorns the upper body and the caudal fin is also yellow. The Scribbled Angelfish derives its name from the many scrawls over the body and large dorsal and anal fins. Usually indistinguishable in color variations from male to female, the Scribbled Angelfish male may exhibit a small white patch on the gill cover. The sketch is a quick pencil sketch for proportions and then direct to watercolor without ink. Holbein and Daniel Smith watercolors in a Stillman and Birn sketchbook. 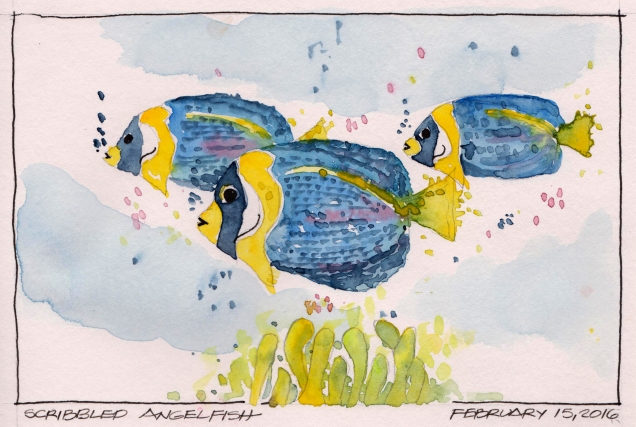