At the very center of Woods Hole, a storied village playing a lead role in Cape Cod’s colorful history since the 1600’s, stands the Woods Hole Inn. This Cape Cod inn was first erected in 1887, as the area moved beyond its roots as a whaling village and merchant industrial hub, and embraced its future as a cradle of marine science and a summer playground. Originally built with 30 rooms, the four story gabled building was known early on as the Avery House, commanding waterside views of Great Harbor, crowded with merchant sailing ships, as well as the bustling train terminus next door. Back in the day, local lore has it that inn proprietor Mrs. Avery owned a parrot who squawked “Giddyup!” and “Whoa!” from the front porch whenever the horse-drawn mail coach passed. Today, from that same porch, guests can watch the nearby drawbridge go up and down, as it lets all manner of research and pleasure craft in and out of the snug inner harbor called the Eel Pond. Ink work done on site Plein Air and the watercolor added at home later. 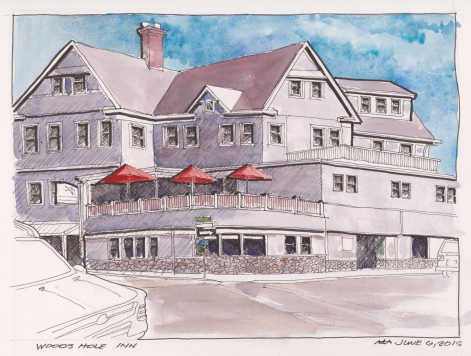