More work travel and it is to New York City this time. A beautiful morning sitting in the Paris bistro chairs watching people on their way to work and a Tai Chi group A beautiful shaded oasis in the city. Bryant Park is a 9.6-acre privately managed public park located in the New York City located between Fifth and Sixth Avenues and between 40th and 42nd In Midtown. Although technically the Main Branch of the New York Public Library is located within the park, effectively it forms the park’s functional eastern boundary, making Sixth Avenue the park’s primary entrance. Bryant Park is located entirely over an underground structure that houses the library’s stacks. Pilot Namiki Falcon fountain pen with Noodler’s Black ink and Pelikan watercolors in a Stillman and Birn Sketchbook. 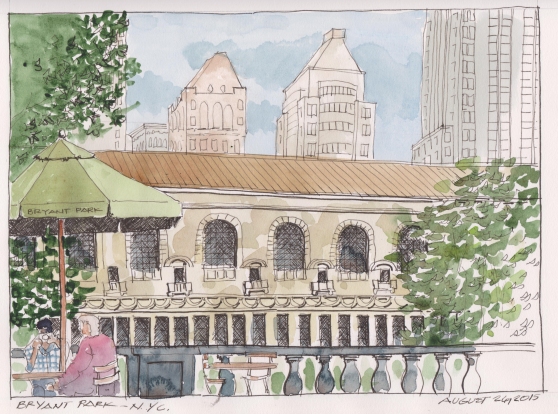